3 Ways to Change the World With Your Wonder Woman Mindset 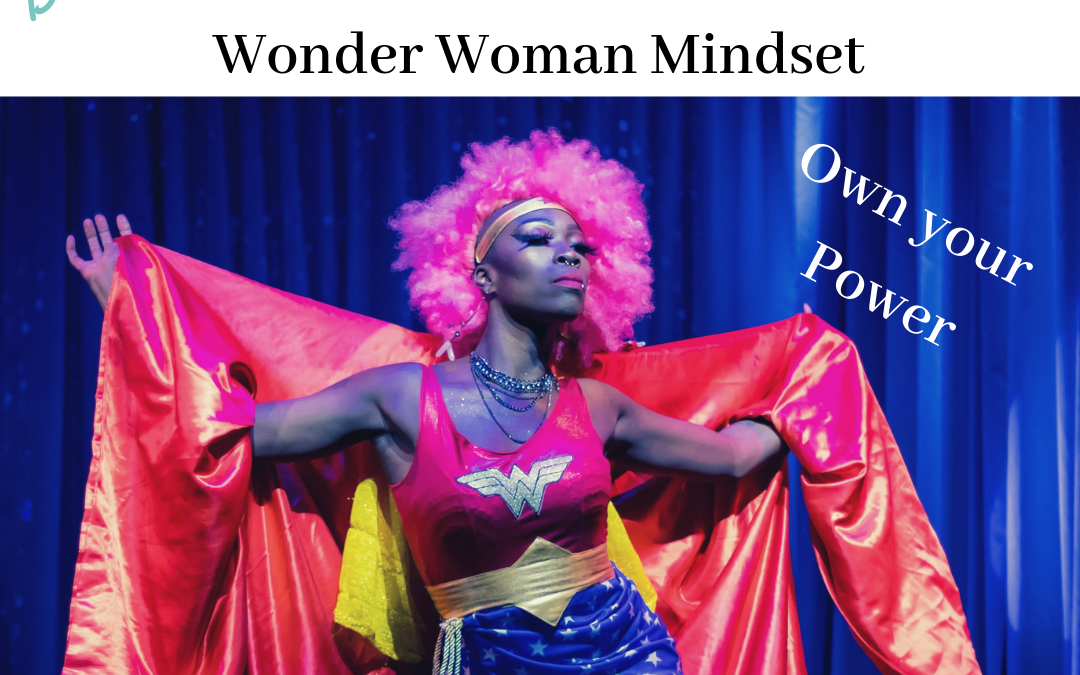 When growing up the TV series Wonder Woman was a big hit in our house. As a young girl, it was great to see a strong female superhero who was strong, smart and challenging and off course, able to beat up the boys…Lol, and still be feminine and sexy. In this blog by Dr Patti Fletcher ‘3 Ways to Change the World With Your Wonder Woman Mindset’ I love that she reminds us to be true to ourselves by recognising that we are not defined by our past, failures or other peoples opinions. My favourite point shared by Patti was – Feedback is rarely about the person receiving it and so much more about the person giving it. When someone tells you what he or she thinks of you, your business, your product or anything else, what he or she is really saying could be reworded to, “This is important to me.” Enjoy the read and let me know what your favourite point was. Maureen Egbe

In the beginning of the Wonder Woman movie, Diana Prince openly reflects on the darkness consuming mankind. Although that gloom-and-doom sets an ominous tone, Diana immediately shifts her mindset and turns into the Wonder Woman we know and love:

“I used to want to save the world. To end war and bring peace to mankind; but then I glimpsed the darkness that lives within their light. I learnt that inside every one of them there will always be both. The choice each must make for themselves — something no hero will ever defeat. And now I know . . . that only love can truly save the world. So now I stay, I fight and I give — for the world I know can be. This is my mission now. Forever.”

Mindset is powerful. It determines values, construction of meaning, where you place your energy. Everything. It takes into account how you intellectually understand a concept and transforms it into how you live your life. Being open to shifting your mindset, especially about deep-seeded beliefs, is one of the best Wonder Woman traits you can adopt. Let’s look at three mindset shifts you can apply today to start your transformation.

1. Your past does not define your future.

Mindsets take hold at multiple stages in life. Much of what we believe to be true can be traced back to childhood, a time when the world told you who you were and you believed it. The family of Lisa Morales-Hellebo, serial entrepreneur, executive producer of #INCLUDE and founder of REFASHIOND moved from Brooklyn to Westchester, N.Y., when she was a child. Her parents’ intention was to give their children a good life filled with opportunity. But, it didn’t work out so perfectly.

“We were the only brown family in our town for quite a while,” Morales-Hellebo says.

They moved into a neighborhood with a racist who was not afraid to show his disgust, leaving severed deer heads on the Morales-Hellebos’ lawn and beating his children if they had willfully interacted with Morales-Hellebo or her family. Morales-Hellebo realized in her thirties that she had spent a lifetime proving the racists beliefs about her wrong and that it was time to shift what drove her to make an impact on the world.

Just a few years before, Morales-Hellebo met a client, Carmen Ortiz-McGee, a fellow Latina, and they became fast friends. Ortiz-McGee was Morales-Hellebo’s first Latina friend. She brought Morales-Hellebo to a networking event with The Marathon Club, an organization of diverse highly successful leaders, and Morales-Hellebo soon discovered that she herself held bias. “It was the first time I have been exposed to a roomful of black and brown people that were millionaires and billionaires. It was mind-blowing and that shocked me. I couldn’t help but ask, why didn’t I expect this of myself?” Morales-Hellebo says. Meeting so many highly accomplished people who had similar stories to hers but found that they asked themselves different questions and asked those same questions of her: “What are you going to contribute to the world?” Her mindset was shifted forever, and so were her actions.

Morales-Hellobo’s advice on how to adopt a Wonder Woman mindset: Surround yourself with people who fuel you. “[The Marathon Club event] was the first time I really understood the saying ‘your potential is limited or increased by the people with whom you surround yourself.'”

2. Success and failure do not determine your value.

Like Morales-Hellebo, Harriet Minter, journalist and host of the Badass Women’s Hour podcast, held several unconscious biases that trace back to her childhood. Having grown up watching her entrepreneur parents struggle, Minter had a healthy fear of striking out on her own. “I had grown up with firm belief that if you wanted to earn money, you had to work for a company and be paid a regular salary,” Minter says.

Minter’s mindset shift came when, as a journalist for The Guardian, she traveled with a group of female entrepreneurs to New York. The kinship of the entrepreneurs changed her mind about starting her own business. “I started to look at my network differently: who I could team up with, who would help me and who I could help,” Minter says. She has since started freelance writing, consulting and co-hosting the highly successful Badass Women’s Hour podcast. She adopted the practice of creating a monthly MAP (measuring and planning) to set targets and hold herself accountable for achieving them.

Minter’s advice on how to adopt a Wonder Woman mindset: Question your beliefs about what makes a good life — your hang-ups and your actions. “I have become less attached to success and failure. When things don’t work out, I let them go, and when things work, I go with it,” Minter says.

3. Opinions are inputs, not directives.

The biggest mindset shift for both Morales-Hellebo and Minter came when they were able to shift away from internalising other people’s opinions of them to neutralising them. Whenever I am coaching female entrepreneurs and corporate executives, the feedback they receive from others is always a topic for discussion. While I am a huge fan of soliciting, gathering and analysing feedback, I caution about what feedback actually is by starting with what feedback is not. Feedback is rarely about the person receiving it and so much more about the person giving it. When someone tells you what he or she thinks of you, your business, your product or anything else, what he or she is really saying could be reworded to, “This is important to me.”

The work of Carol Gilligan, the founder of feminist leadership theory, teaches us that women are innately relational in decision-making. Women tend to consider the impact of a decision in relation to the people it will impact. It’s no wonder that women take feedback and opinions of others into consideration. That is the power of Wonder Women just like you: You use opinions — even when it’s disguised as constructive feedback — as data points instead of as directives.

My advice on how to adopt a Wonder Woman mindset: Accept the context you are in but don’t let it define you. As a board member who holds three director seats on public technology companies told me, “You have to accept that you are dealing in an imperfect world. Some people are going to be comfortable dealing with me — some people are not — but I’m my own judge.”

This site uses Akismet to reduce spam. Learn how your comment data is processed.

This website uses cookies to improve your experience while you navigate through the website. Out of these, the cookies that are categorized as necessary are stored on your browser as they are essential for the working of basic functionalities of the website. We also use third-party cookies that help us analyze and understand how you use this website. These cookies will be stored in your browser only with your consent. You also have the option to opt-out of these cookies. But opting out of some of these cookies may affect your browsing experience.
Necessary Always Enabled

Any cookies that may not be particularly necessary for the website to function and is used specifically to collect user personal data via analytics, ads, other embedded contents are termed as non-necessary cookies. It is mandatory to procure user consent prior to running these cookies on your website.